I have always loved the “olde” spelling of jail and feel it lends a subtle feeling of this being an ancient prison…. Please enjoy this pointer-filled metaphor; I invite you to listen, read and revisit as you feel.

People look upon events
unfolding ceaselessly,
taking in all that is shown,
events filtered through mind,
most believing what they think
represents reality.

In this certainty
a prison is constructed and reinforced,
a feedback loop of interpretation
hides the key to freedom,
the gaoler with little to do
but feed the prisoner.

This steady diet of experience
consists of highly processed
and sensually appealing objects,
three squares a day
with second and third helpings
creating a bloated feeling
but never fullness.

There are whispers heard from some
who are mostly thought to be mad,
whispers that speak of a gaolbreak,
a way out of prison, a secret tunnel
that is unknown to the gaoler,
hidden yet accessible from any cell.

A prisoner may sense a truth in these whispers,
having watched an inmate on their block
who became increasingly still and silent,
who somehow became free,
who comes and goes at will,
who now seems to be served by the gaoler
yet never confined.

In silent contemplation
A prisoner may see
a small space between two bricks
that has always been there
but somehow overlooked.
A closer investigation shows
a larger space than at first glance,
a loose section of bricks!

The bell indicating mealtime
sounds jarringly loud
and the prisoner looks away from the bricks
as the gaoler smiles,
happy to display their favorite meal.
Delighted, the prisoner settles in and enjoys,
the loose bricks fading into the background. 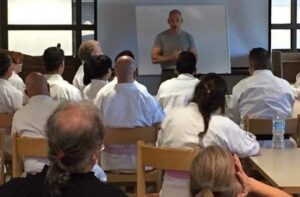